Perhaps the most emotional volume in Herge‘s Tintin series, Tintin in Tibet (1960) is certainly the one I’ve read the most times.

.
There’s not as much action as usual, but with its mystery woven around a heartfelt storyline that sees Tintin and Haddock searching the snowy mountains of Tibet for Tintin’s friend Chang, it’s a fantastic piece of storytelling, that, despite the darker subject matter, is still graced with Herge’s usual fine sense of humour.

.
While it can be difficult to separate pleasant memories of reading this one as a child from the reviewing process, I can safely say that Tintin in Tibet remains distinctive not just for the personal nature of the story, but for the powerful use of white space in the panels – Herge’s famous ‘clear line’ style is so direct in conveying a sense of space that I always find myself drawn in to the setting as much as the story. This is partly what makes the moments of colour, such as the visit to the monastery, so vivid.

.
If your only experience of Tintin is the more explosive CGI outing from Jackson and Spielberg, and you’re not sure about the comics, perhaps start with some of the faster-paced volumes such as the Calculus-themed releases – but if you’re already a fan and you don’t actually have this one, then don’t deny yourself one of the most moving Tintin adventures any longer. 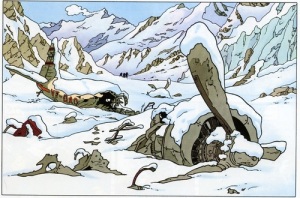 Stay tuned for more in the series of Tintin guest posts – here are the first two from stuart and Maekitso!

2 thoughts on “Tintin in Tibet”